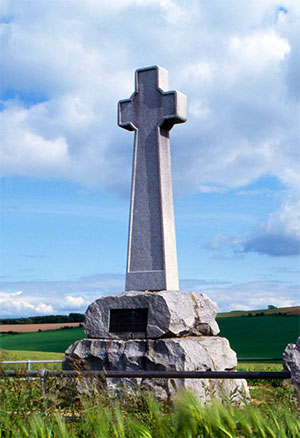 It is possible that this family is of Celtic druidic origin, descending from Marnin the Forester, who held lands in Dunipace, Stirlingshire, about 1200.

Sir Adam Forrester, first of Corstorphine, is generally regarded as the founder of the clan. He was an ambassador, merchant, Provost of Edinburgh, Keeper of the Great Seal of Scotland and Deputy Chamberlain of Scotland. In 1376 he acquired the estate of Corstorphine in Midlothian (now part of Edinburgh), where Corstorphine Castle (now demolished) and the Collegiate Church of Corstorphine, with the effigies of three of the chiefs, were built by the family. The Dower House of the Lords Forrester now houses a local-history museum. Adam's son, Sir John Forrester the elder, also became Keeper of the Great Seal of Scotland and was Chamberlain of Scotland and Keeper of the Household to James I. With his father, he fought in 1402. Sir James, the seventh chief, was killed in the disastrous Battle of Pinkie in 1547. The tenth chief, Sir George Forrester, was created a Baronet of Nova Scotia and raised to the peerage as Lord Forrester of Corstorphine, in 1633. On his death the baronetcy title became dormant, and it still awaits a claimant.

James and William Baillie, the sons-in-law of the first Lord, assumed the name and arms of Forrester and inherited the title under a re-grant of the peerage. James, an ardent royalist, was fined heavily by Cromwell and the estates became burdened with debts. He was murdered in 1679 by his mistress, Mrs Christian Nimmo, when his brother, who was mad, inherited the title. The fifth Lord, Colonel George of the Grenadier and Life Guards fought under Marlborough at Oudenarde and Malplaquet in Flanders in 1708 and 1709, and was wounded in the Battle of Preston in 1715. Eventually the male line died out and the title descended through heiresses to the Earls of Verulam. The chiefly family had several landed cadets, one of whom, Sir John Forrester of Niddry, died at the Battle of Flodden in 1513. Two French cadet branches, Le Forestier du Buisson-Sainte-Marquerite, and Le Forestier de Foucrainville, in Normandy, descend from Sir Adam, and M. Jean Le Forestier is their head. There was a Stirlingshire branch, the Forresters of Garden, heritable keepers of the Torwood to the Scottish kings (the Torwood was a Royal forest and hunting ground, and may have been a sacred Celtic grove known to the Romans as Medionemeton, or Mid Grove). They owned the barony of Garden, with the Tower of Garden as well as the Torwood, where the ruins of Torwood Castle still stand. Sir Duncan, first of Torwood, was Comptroller of the Royal Household to James IV. Sir David, fourth of Torwood, was killed in the Battle of Pinkie in 1547.

The family were virtually hereditary provosts of Stirling burgh; no fewer than eight of them held this office. The Church of the Holy Rude in Stirling has the Forrester Aisle, a former private family chapel. A cadet of Garden was the first of the Fifeshire Chieftains, the Forresters of Strathendry, who built Strathendry Castle, a sixteenth-century tower house in Leslie in Fife, where both Mary, Queen of Scots and Oliver Cromwell stayed. Strathendry Castle is the only inhabitable Forrester stronghold today. The Lords Forrester of Corstorphine have been recognised as chiefs of this Lowland clan since the seventeenth century. The potential chief is Sir John Duncan Grimston, Baronet, seventh Earl of Verulam, sixteenth Lord Forrester of Corstorphine, and patron of the Clan Forrester Society. His seat is Gorhambury in St Albans in Hertfordshire, with its fine Palladian mansion. His heir, Viscount Grimston, is the Master of Forrester.

Forresters fought and died at the following battles: Sauchieburn, Pinkie and Langside in Scotland; Halidon Hill, Flodden and Preston in England; Oudenarde and Malplaquet in Flanders; and the many battles of the Le Forestier cadets, including the Battle of Ivry. They were accessories to the murder of David Rizzio, secretary and close friend of Mary, Queen of Scots, and also in Mary's imprisonment in Holyrood House. They held important posts, including those of Keeper of the Great Seal of Scotland; secretary to the king; Chamberlain of Scotland; Master of the Household to James I; Comptroller of the Royal Household to James IV and to his wife, Margaret Tudor; Grand Provisor to Queen Arabella; sheriff of Edinburgh and Lothian; keepers of Edinburgh, Stirling and Skipness Castles, and governor of Belle Island; Bishop of Brechin and Abbot of Balmerino; and heralds to French kings, Normandy King of Arms and Picardy Herald. Among the clan relics and heirlooms is the Corstorphine Pendant, an armorial pendant of gilded bronze, in the Royal Scottish Museum; Sir Duncan Forrester's Antiphony, a fifteenth-century vellum book of Eastertide Music, in the Church of the Holy Rude in Stirling; and the Corstorphine Casket of carved oak mounted in silver, a reputed gift from Margaret Tudor, wife of James IV.

Other Historical Links of Interest