When his father-in-law died in 1654 James Baillie inherited a title and a sizeable estate.

When James Baillie died in 1679 the title survived but the estate was in decline.

James Baillie became the second Lord Forrester when Scotland had to submit to Cromwell and see its Parliament absorbed into the English parliament. Baillie, a Royalist, surrendered to Monk in 1654. He was fined for his opposition to the Protector. In addition James had borrowed heavily and his creditors pressed for payment.

At Corstorphine, James played his part as Laird concerning himself with local matters. He got an Act in 1662 authorising four fairs in the year "for selling horses, nolt, sheip, bestiall and other goods". These were to be held on the first Tuesday after Easter, 24th July, 26th August, and 20th October. Fairs were social as well as business occasions for local people. No doubt packmen from Edinburgh would be there to tempt housewives with city wares while children sampled the delights of gingerbread. For men there was a variety of village inns where the day ended in conviviality. 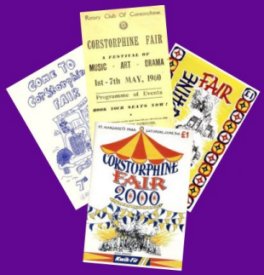 Baillie's inability or reluctance to pay bills drove Harry Barclay the baker to appeal the Privy Council to make Lord Forrester pay his bread bills. However James did not have to pay for the sixteen hens sent to his baron officer, Cuthbert Neilson, for use at the castle as they were kain hens due by John Tait, farmer, for the lands of Langsaughton.

James Baillie's philandering with women came to its tragic end in 1679. The meeting of Corstorphine Kirk Session on 22nd January 1679 was concerned solely with the behaviour of the Laird. It says: "this day was advice of ye session required about James Lord Forrester and Christian Hamiltoune spouse to Andrew Nimmo their living and cohabiting in one house together as also annent his fall in fornication with one Bessie Ritchie. The Session in respect that his Lordship is a person of Qualitie Thinks fitt that the advise of the presbytirie be first sought".

Forrester's niece, Christian Hamilton, daughter of Christian Forrester and Hamilton of Grange, was the fate destined to slit the thread of life from James. She was the wife of an Edinburgh burgess and also her uncle's mistress. She came to Corstorphine on the evening of 26th August 1679 when, according to tradition, Baillie was drinking in the Black Bull Inn at the east end of the High Street. 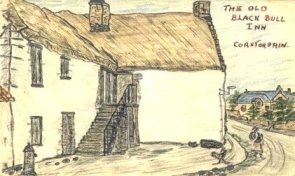 She sent word to him to meet her at the great sycamore tree beside the dovecot in the castle grounds. In the shadows of the tree a violent quarrel ensued. Outraged by his betrayal - "called hir whoor" - she killed him with his own sword. She said he was drunk "in which condition he commonly was very furious" and that he ran at her with his sword. She grasped it to save herself and he fell on the sword's point.

She hid in Corstorphine Castle but was found and taken to the Tolbooth of Edinburgh. She tried to escape the law by pleading pregnancy but the doctors found no evidence of such a condition. A month later disguised in male clothing she escaped in the gloaming. The next day she was caught at Fala Mill, brought back to Edinburgh, and sentenced to death. Wearing a "white taffetie hood" and baring her shoulders herself she was, with apparent courage, beheaded at the Cross of Edinburgh on 12th November 1679. 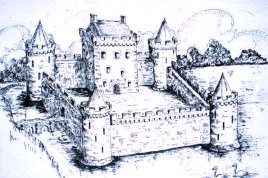 The Castle as it may have looked in its Heyday 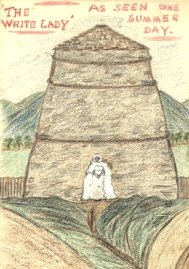 The White Lady as sketched by Bob Mollison

The white hood gave rise to the tradition of a ghostly white lady haunting the sycamore tree. Within living memory Bob Mollison, market gardener in the adjoining Woodbine Nursery, declared he had often seen her, and referred to her as "his" White Lady. In 1981 a tapestry artist in the studio beside the sycamore tree, a person not given to seeing ghosts, saw a woman walking down the grass towards the road.

C.K. Sharpe in his notes to Kirkton's History of the Church of Scotland says that after James's death a dispensation from the Pope to marry his niece was found in James's closet and that it was Forrester's delay in using it that angered Christian. The previous year she had borne James a daughter also called Christian. This child was raised as Christian Mathie and was married in 1718 to Robert Thomson of Corstorphine.

The meeting of the Kirk Session on 31st August 1679, five days after the murder of the laird, was silent about the death of the patron of the church, though it must have been uppermost in their minds. Perhaps they were influenced by Forrester being "a person of Qualitie".

Bessie Ritchie who was named in the Kirk Session records in 1678 had no hesitation in claiming James Baillie as the father of her child and she duly did her repentance at the Pillar in the kirk. Another woman, Anna Mowbray, also admitted adultery with his Lordship some years previously.