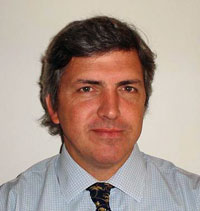 Roberto Forrester
Dear relatives, I am Roberto Forrester from Argentina. I work as a Pediatrician. One of my hobbies is to search and find my ancestors. Last week, while my cousin Yvonne Forrester and I were working on our Family Tree and uploading it on a website http://www.ancestry.com, we ran into the Clan Forrester Website and we were surprised of the quality of this website. We both wanted to be part of it. So I completed the suscription form. I will try to shortly describe some important moments of my family history.

My Great-Great Grandfather WILLIAM FORRESTER was born in England (Burslem, Staffordshire) (Abt 1840). We found in the British Embassy's records in Argentina, information that he was 24 y/o on April the 22nd of 1865 and that he arrived in Argentina in 1863(Abt). In an old newspaper, The Standard, we found that his father's name was John Forrester. In an Argentinean website, British Settlers in Argentina (http://www.argbrit.org), we found that William Forrester's occupation was a merchant. He married Mary Ann Cowes (Argentina) on August the 10th, 1868 (St John's Anglican Cathedral in Bs As) and that they had 8 children:

In 1867, William Forrester participated in the first official football match in Argentina (20 June 1867) documented in the newspaper, The Standard. This is very important to tell to our children because here in Argentina, Football (Soccer) is very popular and we love it. In 1896, many Forresters participated in the foundation of BELGRANO ATHLETIC CLUB (BAC), and since then, the club has been always full of William's descendant members and that is why we decided to do the last FORRESTER FAMILY MEETING in that place (Nov/2006).

As the Forrester are a traditional family in this club and of course part of it's history, the club's magazine wrote an article of our family(see the photo). The B.A.C Rugby field's main terrace was named Donald Forrester in honor of a great sportman in all kinds of sports and also a great human being. In 1904, Arthur Humpreys Forrester (one of William's sons) was the first Argentinean football player to score a historic goal against an English football team (Southampton).

William Forrester died on November 20th, 1922 at the age of 82 y/o. (Obituary: The Standard and Buenos Aires Herald newspapers).