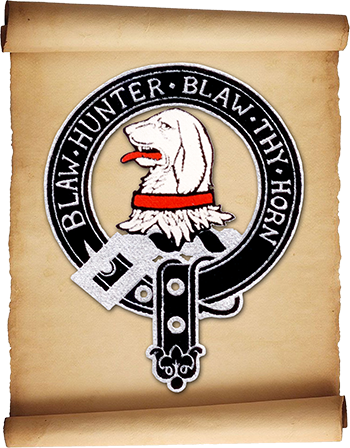 The name is derived from the work of maintaining and controlling wooded preserves. Those persons performing the work were somewhat similar to a combination of our modern forest service ranger and game warden.

There are several theories advanced as to when and where the name was first used as a surname. Although none have been substantiated, it is known that the name, with many variations, appears with some frequency by the late 12th Century. By the 1300's and 1400's, large families were in the areas around Stirling and Edinburgh and in the region of Fife. As the next few centuries passed, bearers of the name were found throughout the Lowlands, southwest into Kintyre and across the Mull of Kintyre into Antrim (Northern Ireland). Families bearing variations of the surname were found in England, particularly noteworthy was the family associated with Bambourgh Castle a few miles south of Berwick-upon-Tweed.

The earliest documents reflect various spellings of the name. It is not unusual to find the same person referred to by two or more of the various, derivative spellings. Many variations in spelling are found in the early records of the United States. Descendants of the various derivatives shown above encourage participation. As well as any others, which may come to light.