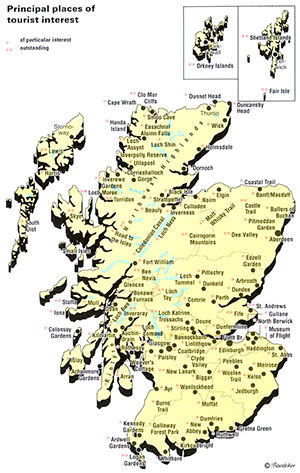 The people of Scotland are feisty, opinionated and fiercely independant and loyal. The country is wild, untamed and beautiful. The bad climate adds an edge to both. Buoyed by the continued irritant of England on its doorstep, Scotland has survived encroachment, brass-monkey weather and the annual influx of stand-up comedians arriving for the Edinburgh Festival. But its people have a rock-solid identity and sense of self. On top of that, the Scots haven't eaten their waterways and forests bare. Scotland's lamb, beef, venison, trout and salmon are highly prized, and game birds such as grouse and pheasant abound. Wash all this down with a shot or two of the world's best whisky and you'll be warming very quickly to the Scottish way of life.

The capital of Scotland is Edinburgh and the largest city is Glasgow. Edinburgh is a cultural center of paper production and publishing, while Glasgow is Scotland's leading seaport and center of shipbuilding. The high technology area know as the "Silicon Glen" is between Glasgow and Edinburgh. Scotland's main exports are textiles, beer, and whiskey. 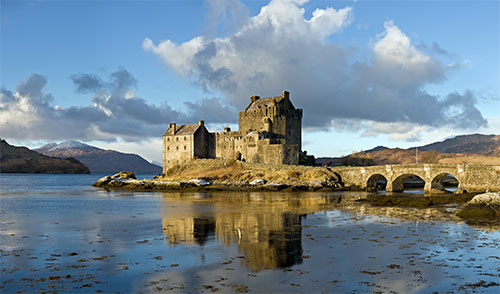 Scotland is separated from England by the Tweed River, the Cheviot Hills, the Liddell River, and Solway Firth. It has the Atlantic Ocean on the north and west sides and the north sea on the east. Scotland has 2,300 miles or 3,700 kilometers of coastline.

Ben Nevis is the highest peak in Great Britain which is 4,406 feet high.

The Church of Scotland (Presbyterian) is the established church, but there are no restrictions on religion.

Fewer than 1000 people, mainly in the north, speak only Gaelic. Fewer than 80,000 speak Gaelic and English.

There are eight universities which are Edinburgh, Glasgow, Aberdeen, St. Andrews, Dundee, Stirling, Strathclyde, and Heriot-Watt.

Since 1707, Scotland, England, and Wales have been united under the name of the United Kingdom of Great Britain. They share a national parliament, but Scotland has its own system of laws and education, based upon roman law, rather than the common law of England. In 1999, the Scottish Parliament was reestablished and is responsible for domestic affairs, including taxes.

Scotland's legal system has remained separate from those of England and Wales and Northern Ireland, and Scotland constitutes a distinct jurisdiction in public and private law. The continued existence of legal, educational and religious institutions distinct from those in the remainder of the UK have all contributed to the continuation of Scottish culture and national identity since the 1707 union. Following a referendum in 1997, a Scottish Parliament was re-established, this time as a devolved legislature with authority over many areas of home affairs. The Scottish National Party, which supports Scottish independence, won an overall majority in the 2011 general election. An independence referendum held on 18 September 2014 rejected independence by a majority of 55% to 45% on an 85% voter turnout.


STATISTICS AT A GLANCE